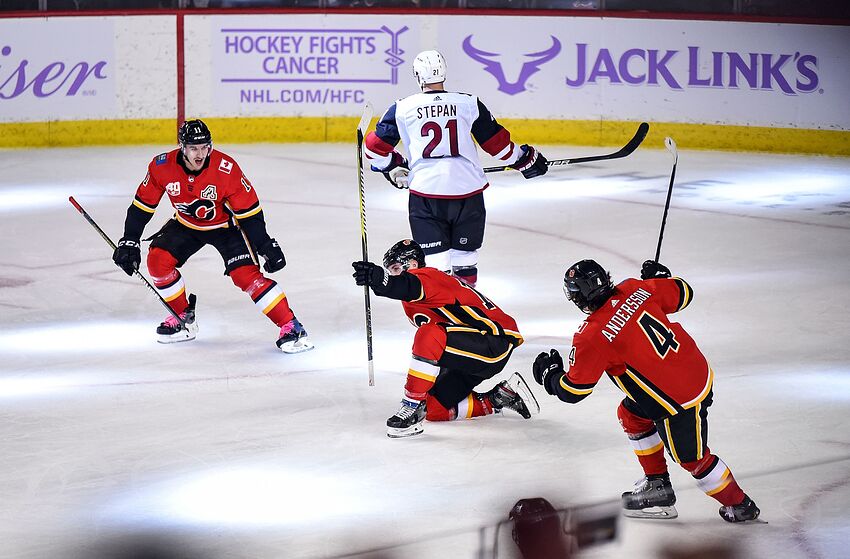 CALGARY, AB - NOVEMBER 05: Matthew Tkachuk #19 of the Calgary Flames celebrates after scoring the overtime winning goal against the Arizona Coyotes with Mikael Backlund #11 and Rasmus Andersson #4 of the Calgary Flames on November 5, 2019 at the Scotiabank Saddledome in Calgary, Alberta, Canada. (Photo by Brett Holmes/NHLI via Getty Images)

The Arizona Coyotes dropped the ball last night against the Calgary Flames. The ‘Yotes had a two-goal lead with about 5 minutes to go in the game, and it ended with a loss in OT. That and more in today’s Morning Howl Report!

The Coyotes lost a tough one last night in OT. Yesterday shows that if you do not capitalize on power play opportunities and put teams away it can come back to bite you later. Arizona failed to register one power-play goal, that could have made the difference last night and given the ‘Yotes a 3 goal lead.

There were some good takeaways from the loss. Clayton Keller played very well and even registered a goal tonight. Keller was all over the ice, especially in OT when he drove to the net and almost scored a goal.

I think the Coyotes can benefit from last night’s loss. The team can use it as a wakeup call and try and grow a little bit more as a unit. Now the blue line looked weak yesterday with some injuries in the lineup, that is expected when you have back to back games. Arizona will benefit from a day off before playing Columbus at home.

After beating the Edmonton Oilers in Edmonton on Monday, some people in the media started to talk about the Coyotes system. They called it out as boring and not fun to watch. Well, we all are sorry that you feel that way! (Arizona Sports)

The Coyotes looked shocked last night against the Flames. They failed to rise above adversity and succeed in OT. Luckily Thursday will offer the ‘Yotes another opportunity to play and dominate a team. Arizona had a great first half of the game, it was when they took off the gas that they faltered.

News from around the league:

NHL Power Rankings looking especially good for the Islanders and Bruins, not so much for Detroit (CBS Sports)